Clare wandered up to the bourach. She said it was a lovely walk, and she hardly saw a sole. As she was having a cuppy outside, a couple went past and asked if she'd been staying there. She told them that she was doing a structural inspection on behalf of the club. They seemed impressed! She took some photos showing that some work is required over the summer to finish off the job. Here are details of her photos.

* Daylight showing through a few bits of the back wall, half a dozen at most and quite small.
* Graffiti from yesterday. She forgot to check the vistors' book to see if people were in over lockdown.
* Left hand side of the door is fine.
* All the wires look in place and holding tight
* Looks great over all (view of the door from the path)! * Bone dry amd in good condition (interior view)
* A bit of turf missing from the back left hand corner
* Gaps needing filled (right hand side of door
* Turf from corner (lying on ground)
* Roof looking good. both poles still there 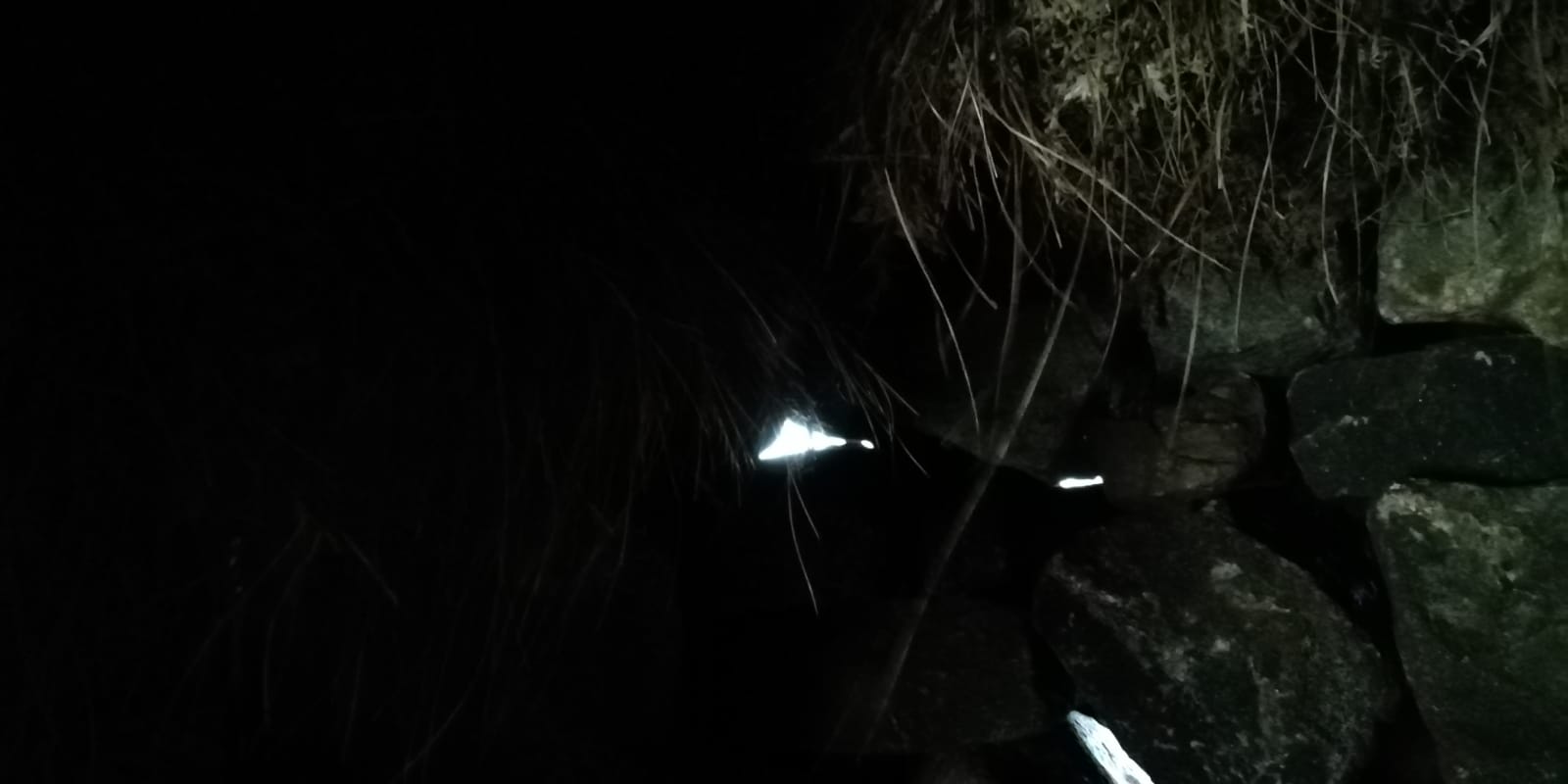 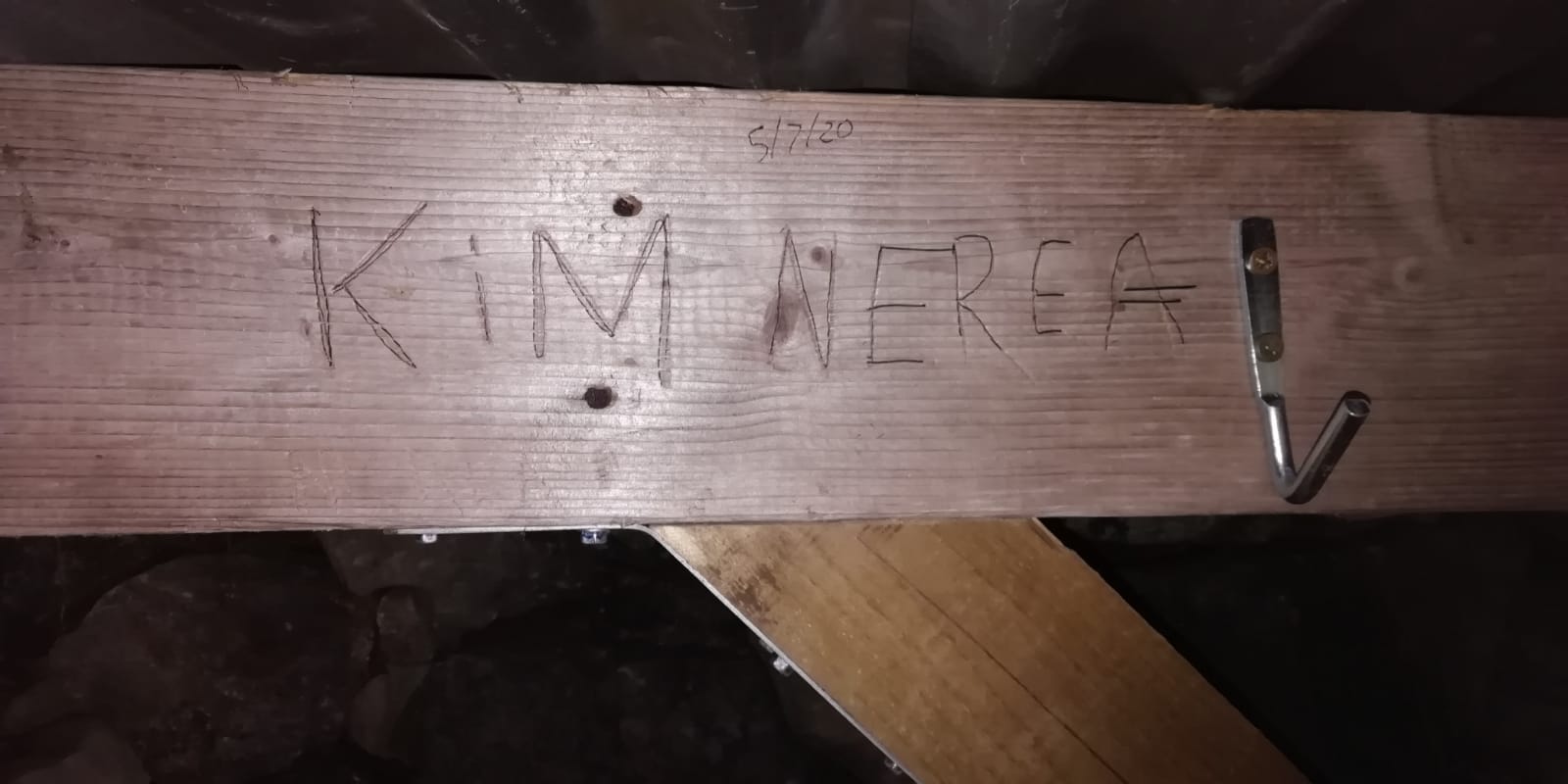 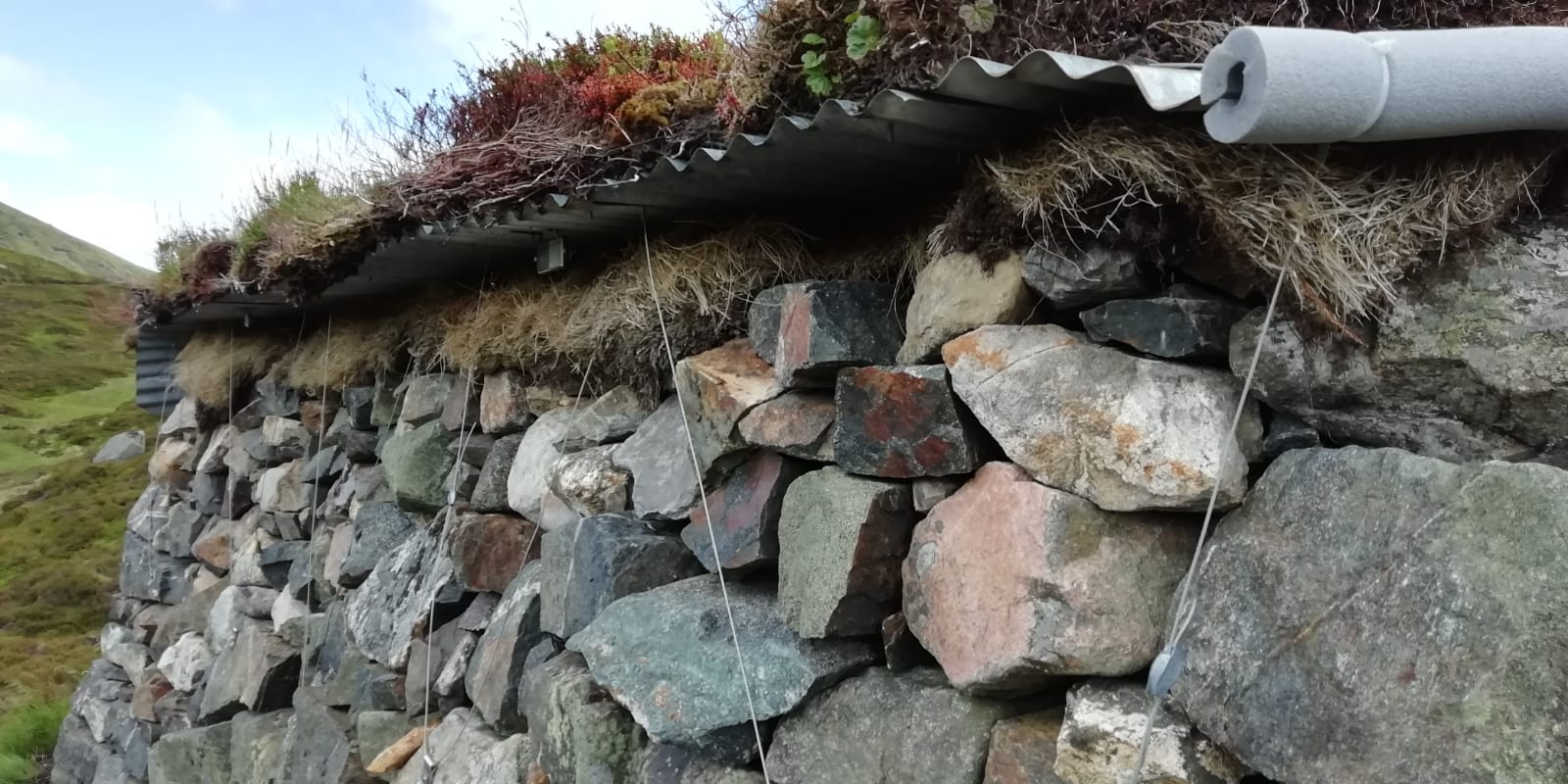 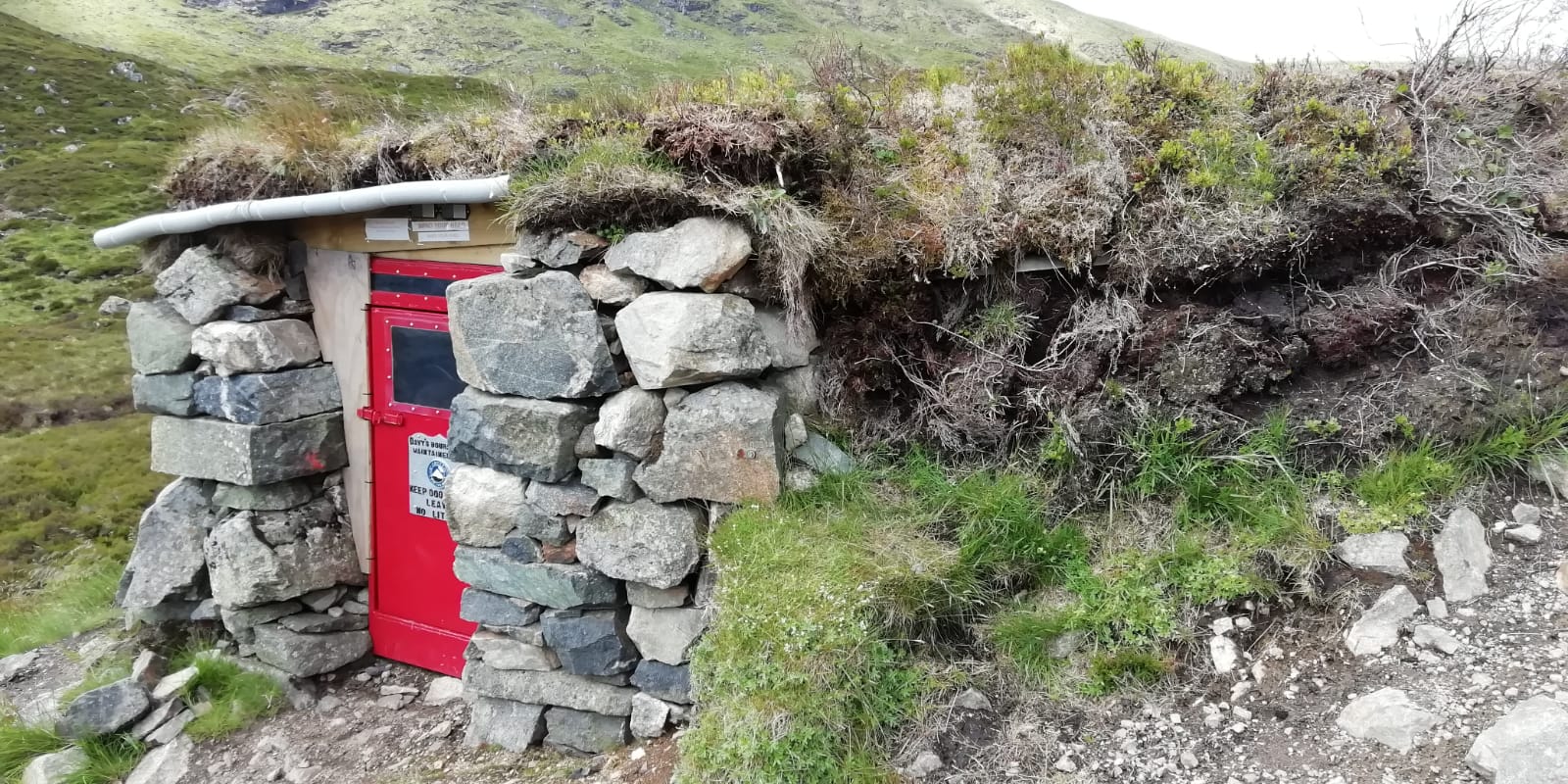 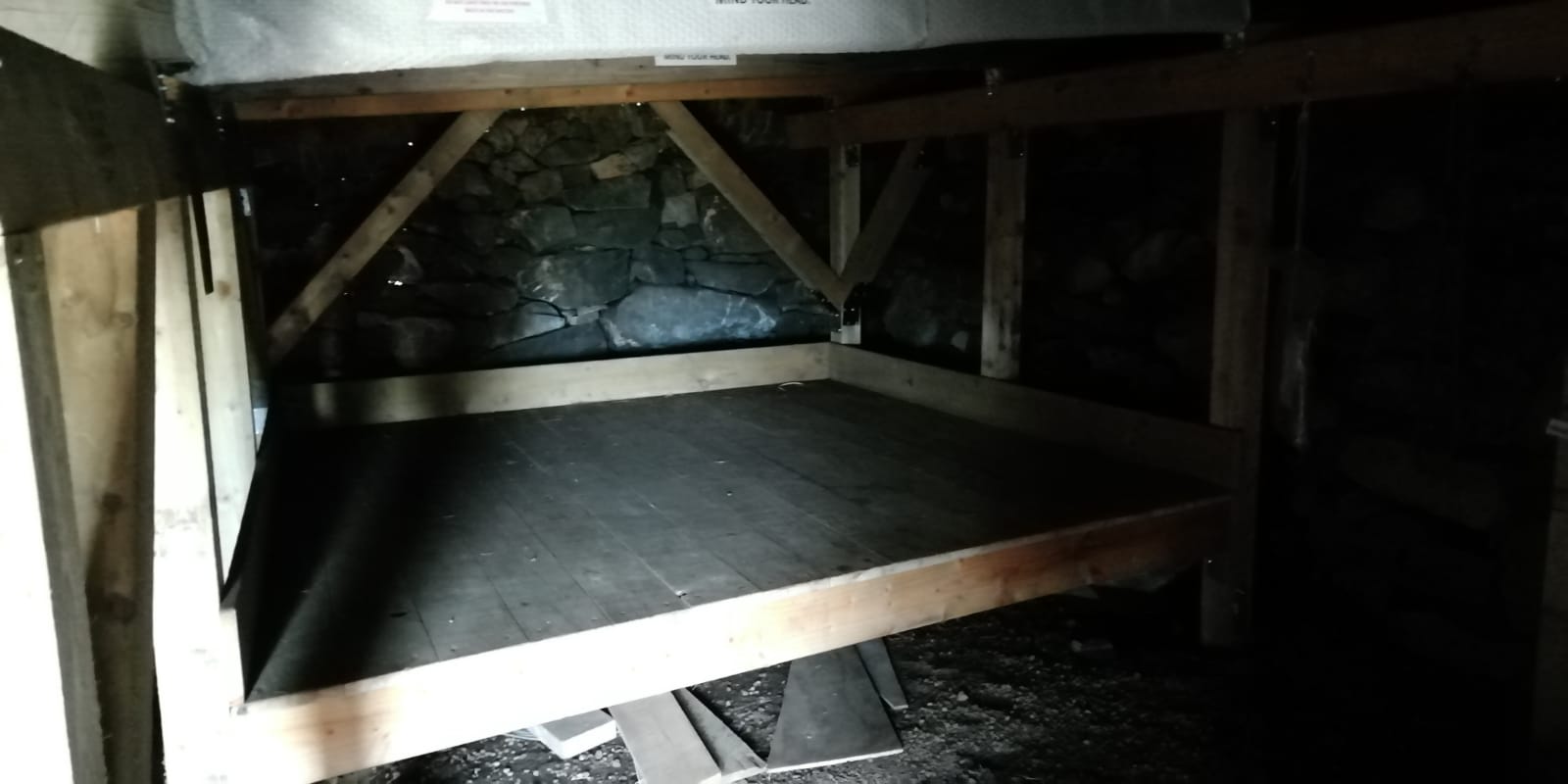 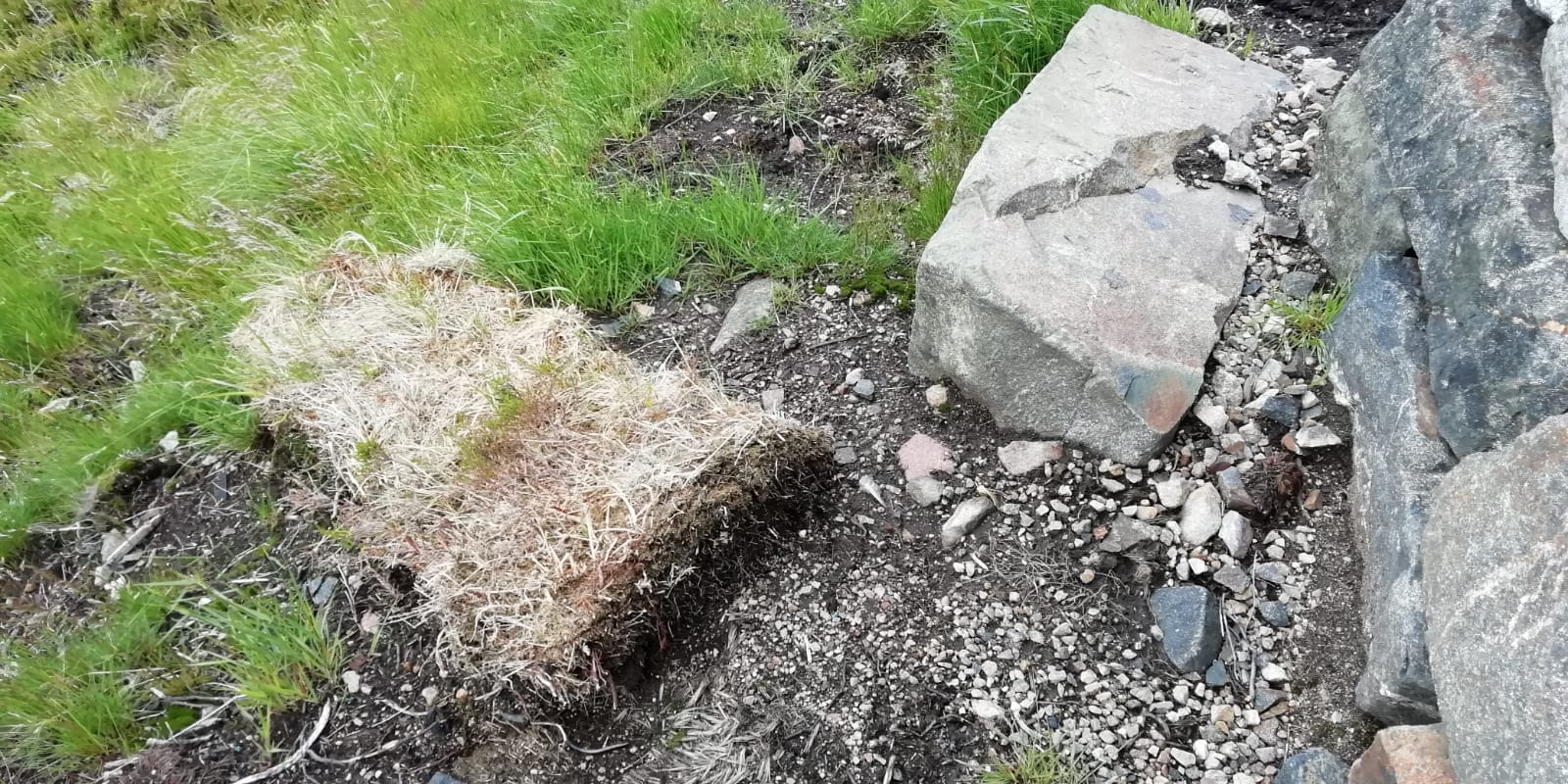 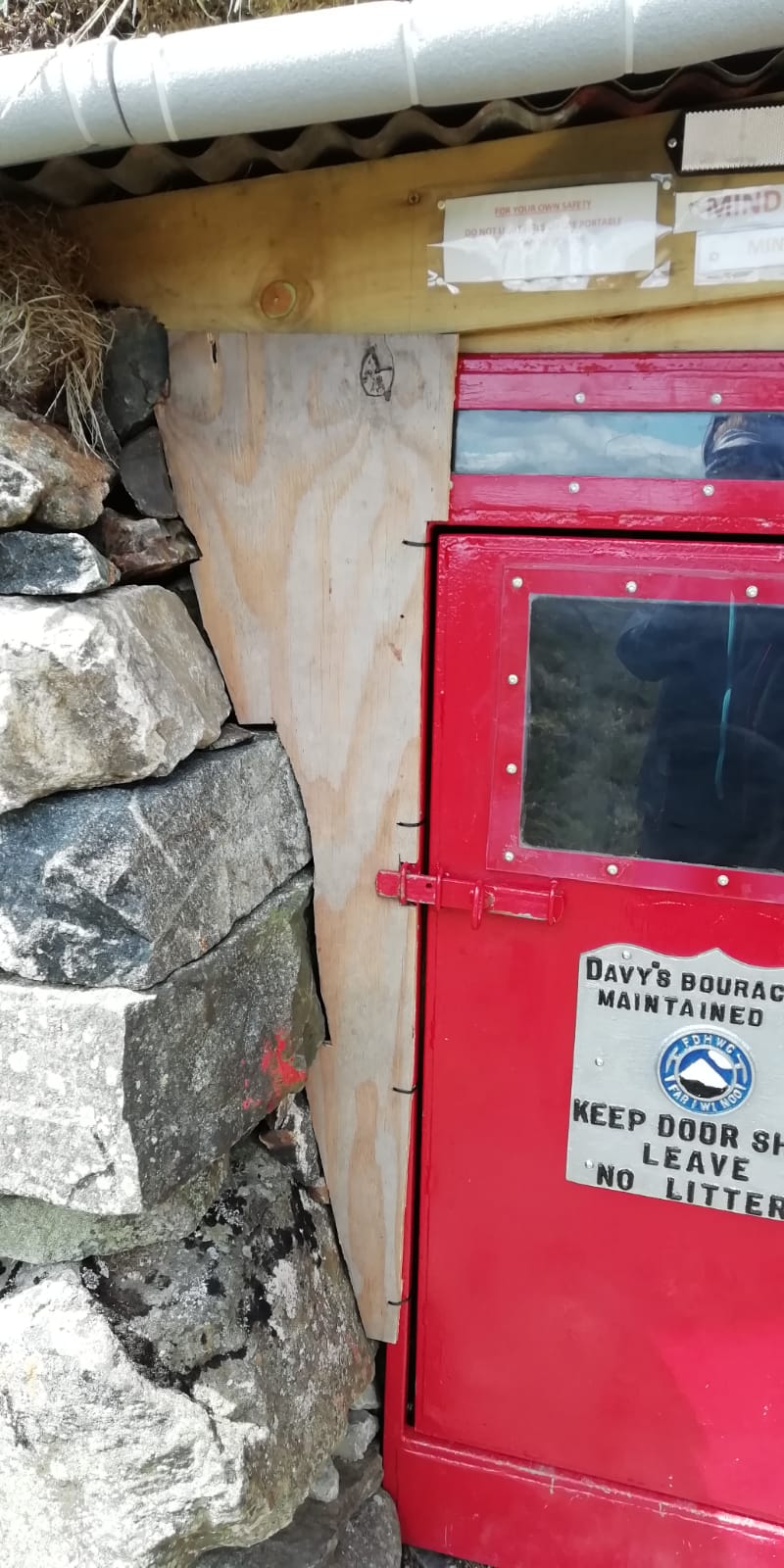 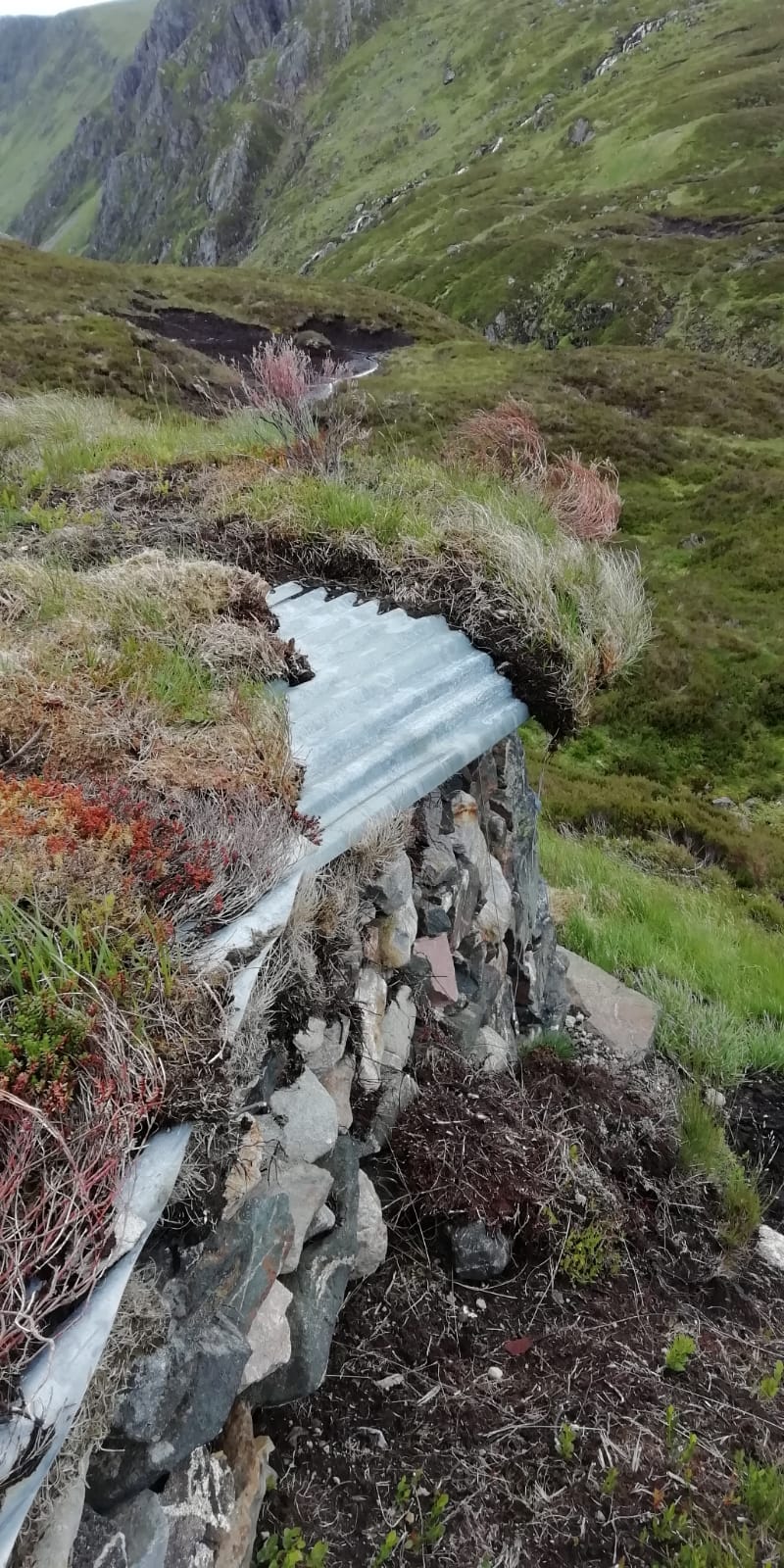 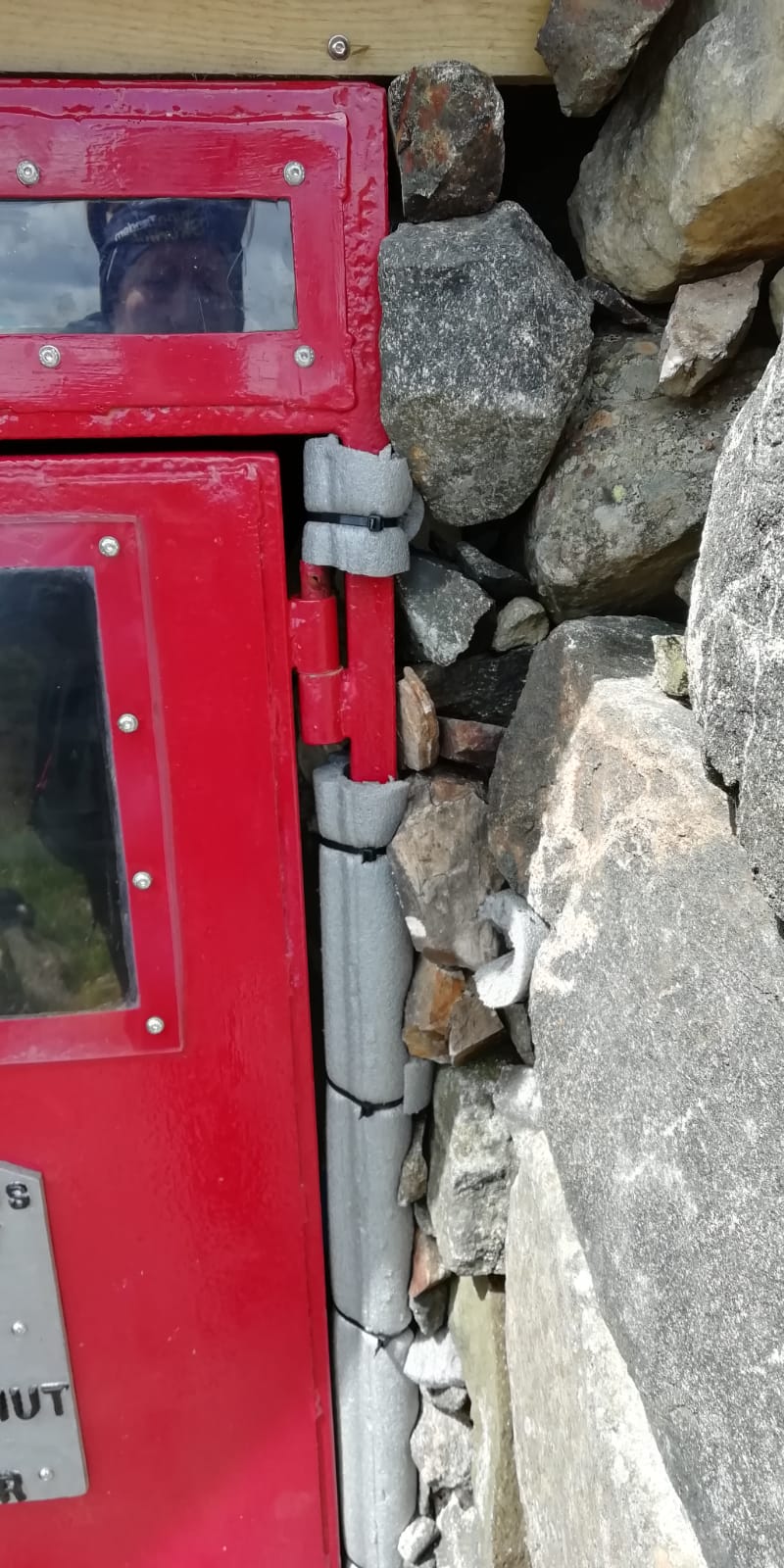 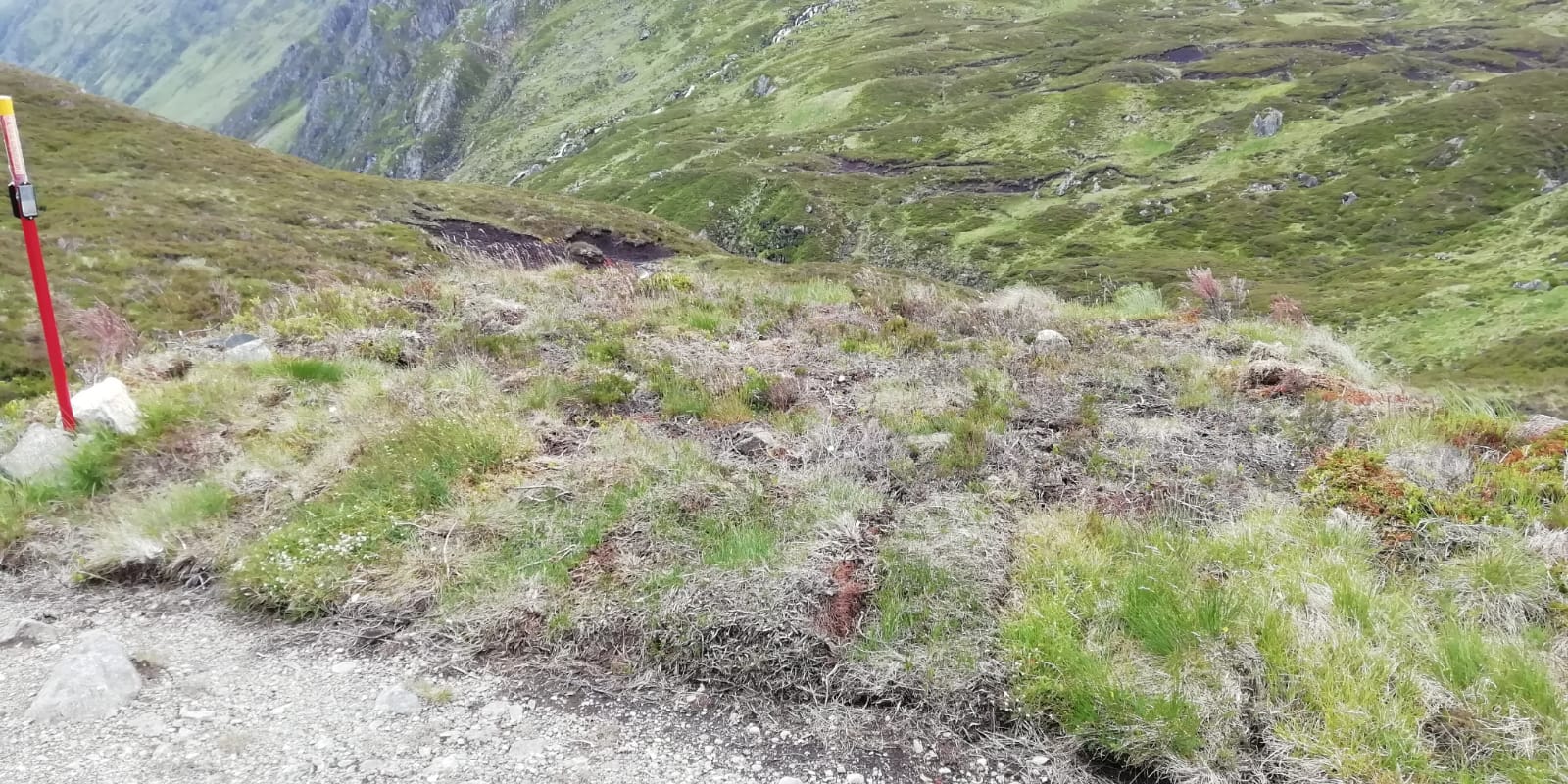 Bob had received news from the Glen Doll Ranger that it had been reported to him that the Bourach is full of snow. Graeme went up to the Bourach to check it out. Here is his report.
"It is indeed largely filled with snow - probably a couple of tonnes - more inside than is on the roof. It is getting in through some gaps under the roof but mostly through little holes in the walls. A couple of turfs have rolled off - and a couple that were at the path edge have opened up probably the biggest hole. The fallen turfs were frozen to the ground or I might have tried to put them back. The stack of small stones that filled the worst door gap had partially fallen - contributing to the thru-flow of wind that carries the snow in. I had taken up some plywood and the tools required to shape and fix it. That gap has now fairly well been plugged. I didn't try / have time to dig out the snow - due to the cool shade inside, it will stay there long after the outside snow has melted. The platform is pretty much covered, piled to the roof at the rear - the floor under the platform has quite a pile too. If anybody wishes to go up and clear some of it, that would be good - maybe not necessary as it will melt over the next month or so - hopefully.
During the summer, I would propose we arrange a workparty to cover up the North wall a bit better - maybe a couple of roofing sheets, backfilled with the soil/heather adjacent to the north wall. The roof sheeting had previously extended over that wall a bit further. The roofing turf can be put back - the dry summer maybe contributed by shrinking & lightening the turf allowing it to move.All in all, after a quick inspection, the walls seemed to be sound, the roof & wire ties were secure, the turf on the wallhead was generally intact. Considering the winds it must have seen, a bit of snow is not too bad." 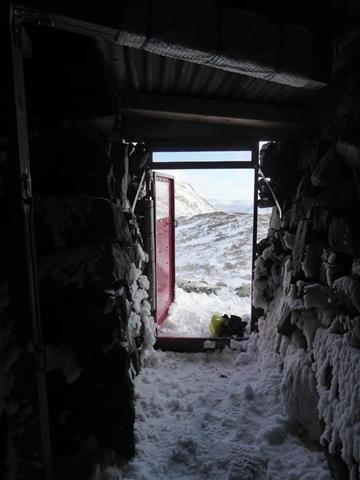 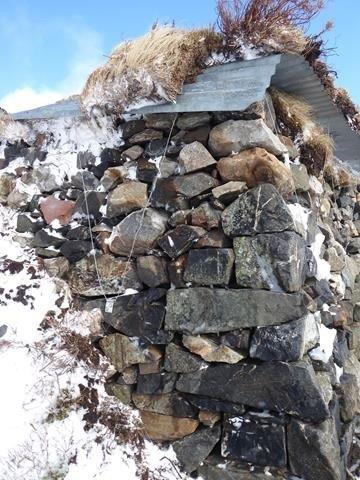 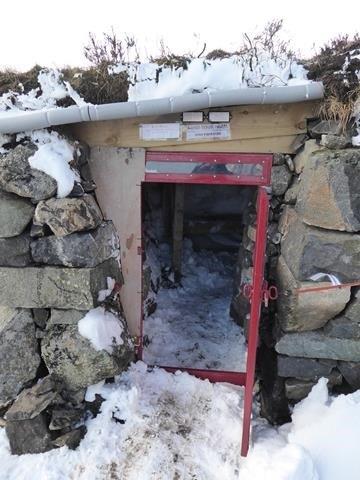 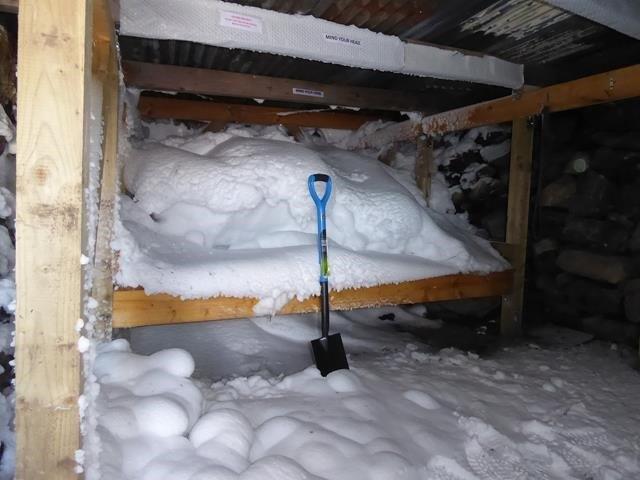 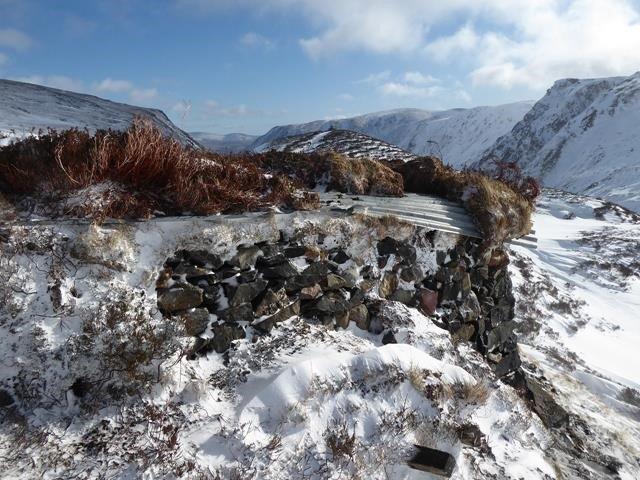