19 members attended (including all 3 honorary members). Met at the car park at Carrot Hill, NO 464 409, at 7:30pm. Unfortunately the haar had rolled in and the views were somewhat limited. It was a gentle climb up to the trig point on Carrot Hill. From there the group followed the old quarry road to Dodd Hill with its big cairn. Most of the group descended southwards to have a look at the old quarry, from which Carmylie slate was extracted. On the way back, this group plunged into knee-deep heather to search for a prehistoric cup-marked stone. Using GPS we were able to find the 10m square and eventually found the stone, which was only discovered in 2015. Details can be found on the internet. The last group entered details in the geocache found at the stone, and reached the cars about 21:40. A successful night - just a pity about the misty conditions. 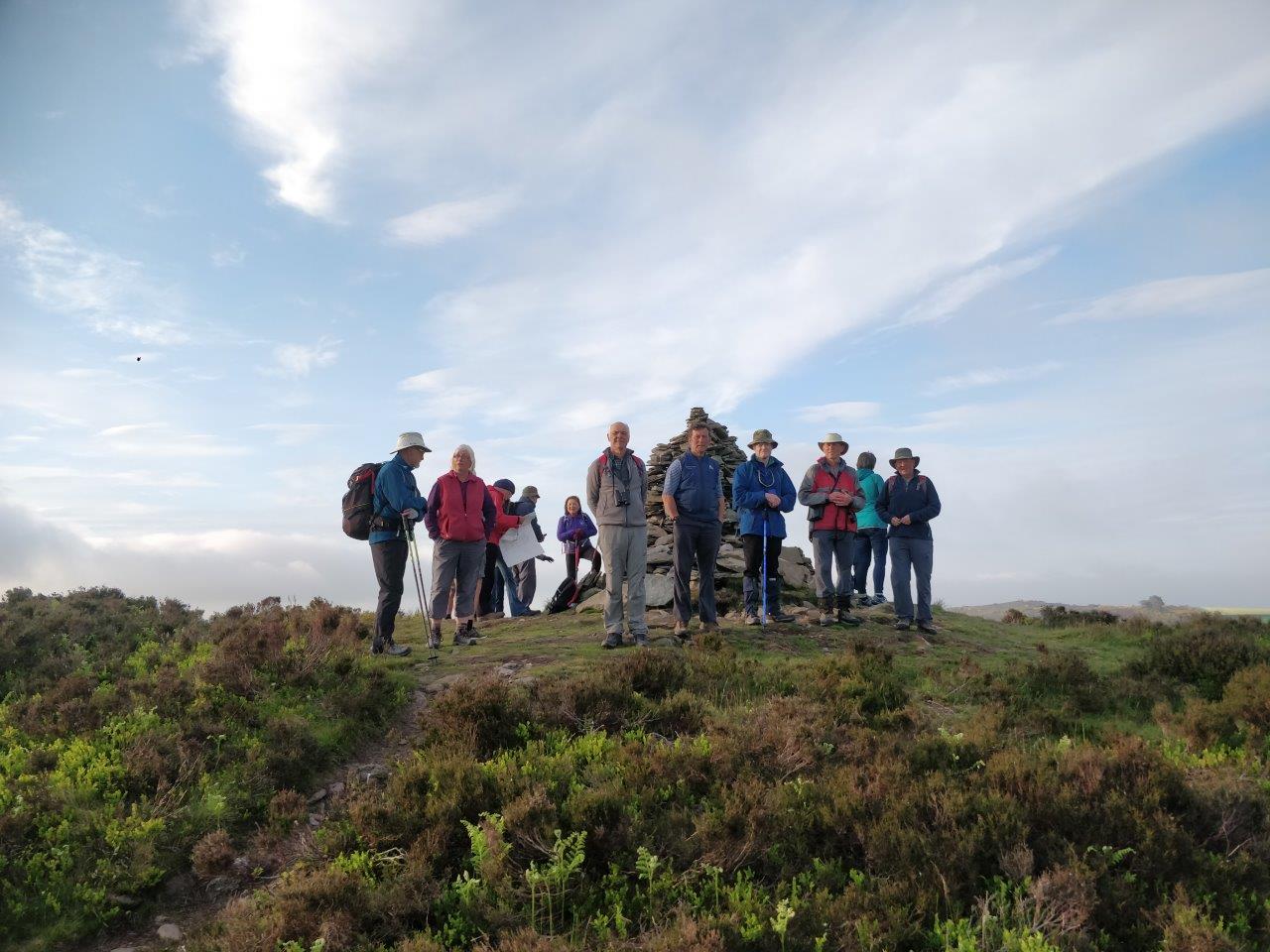 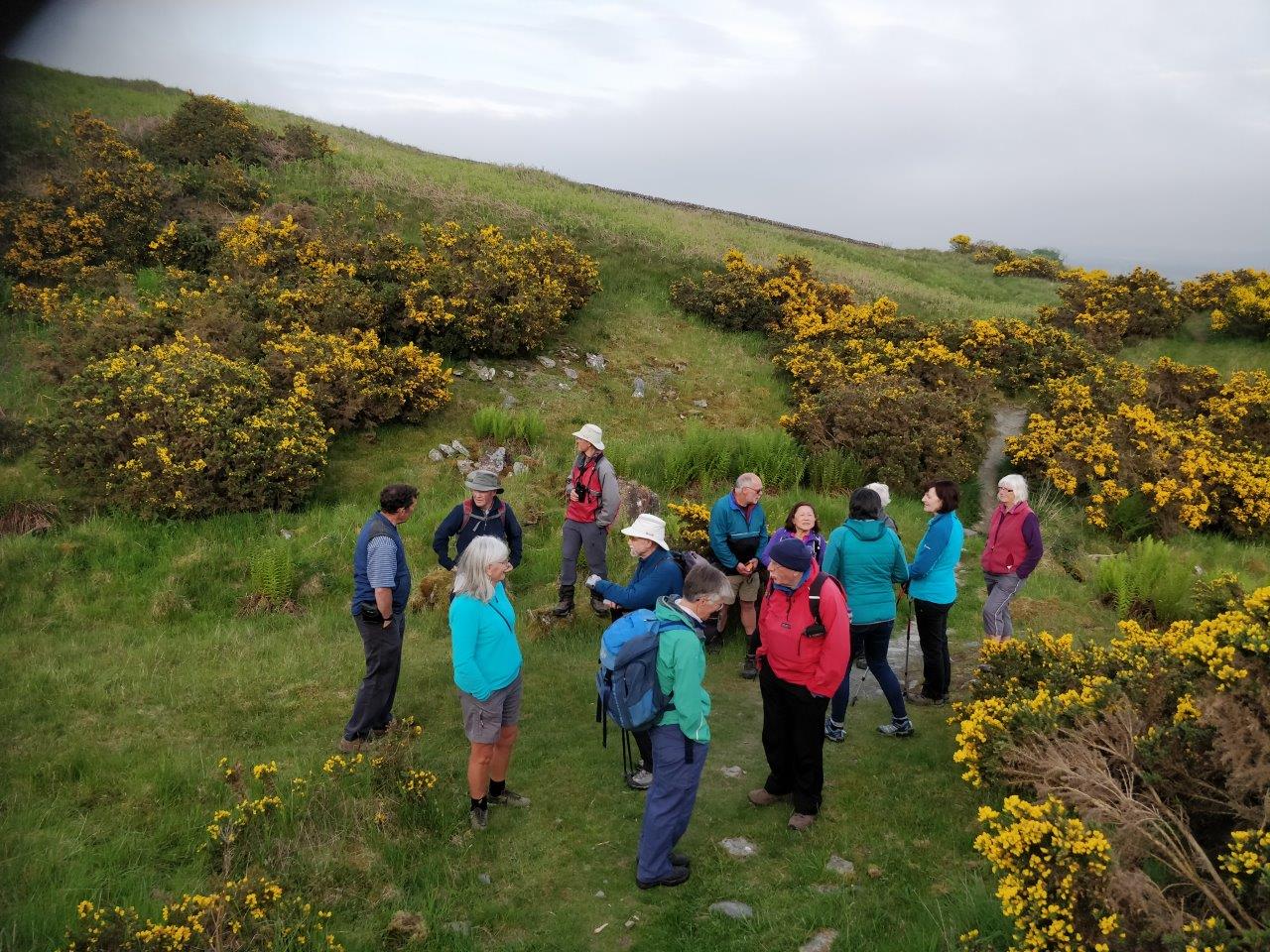 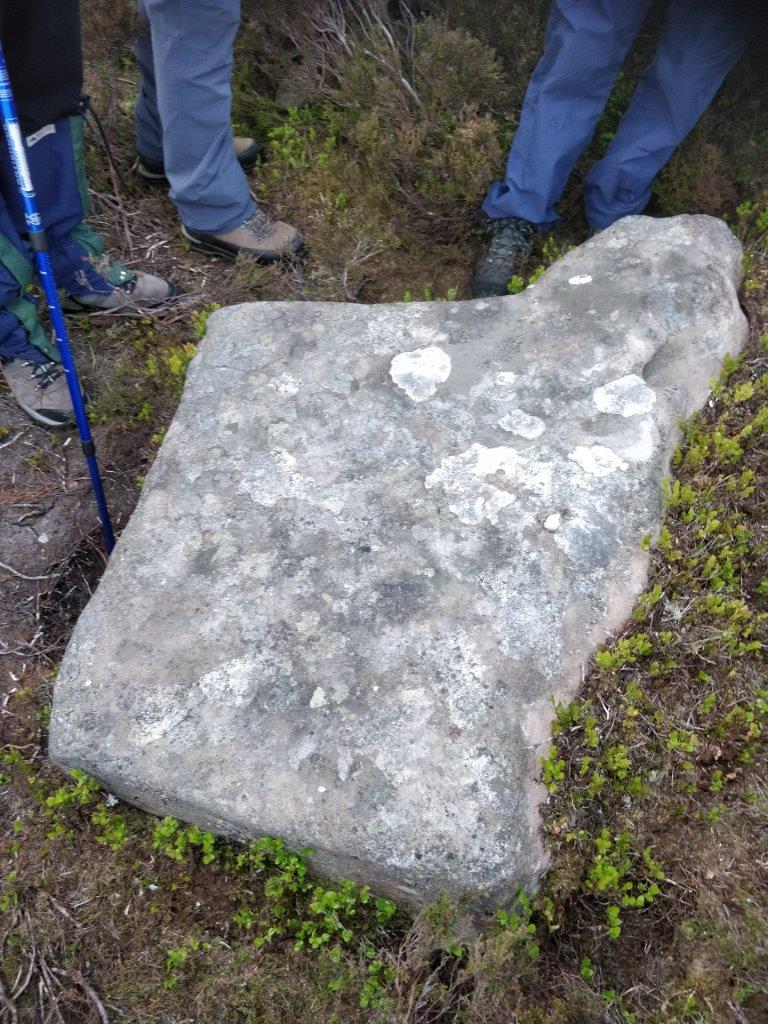 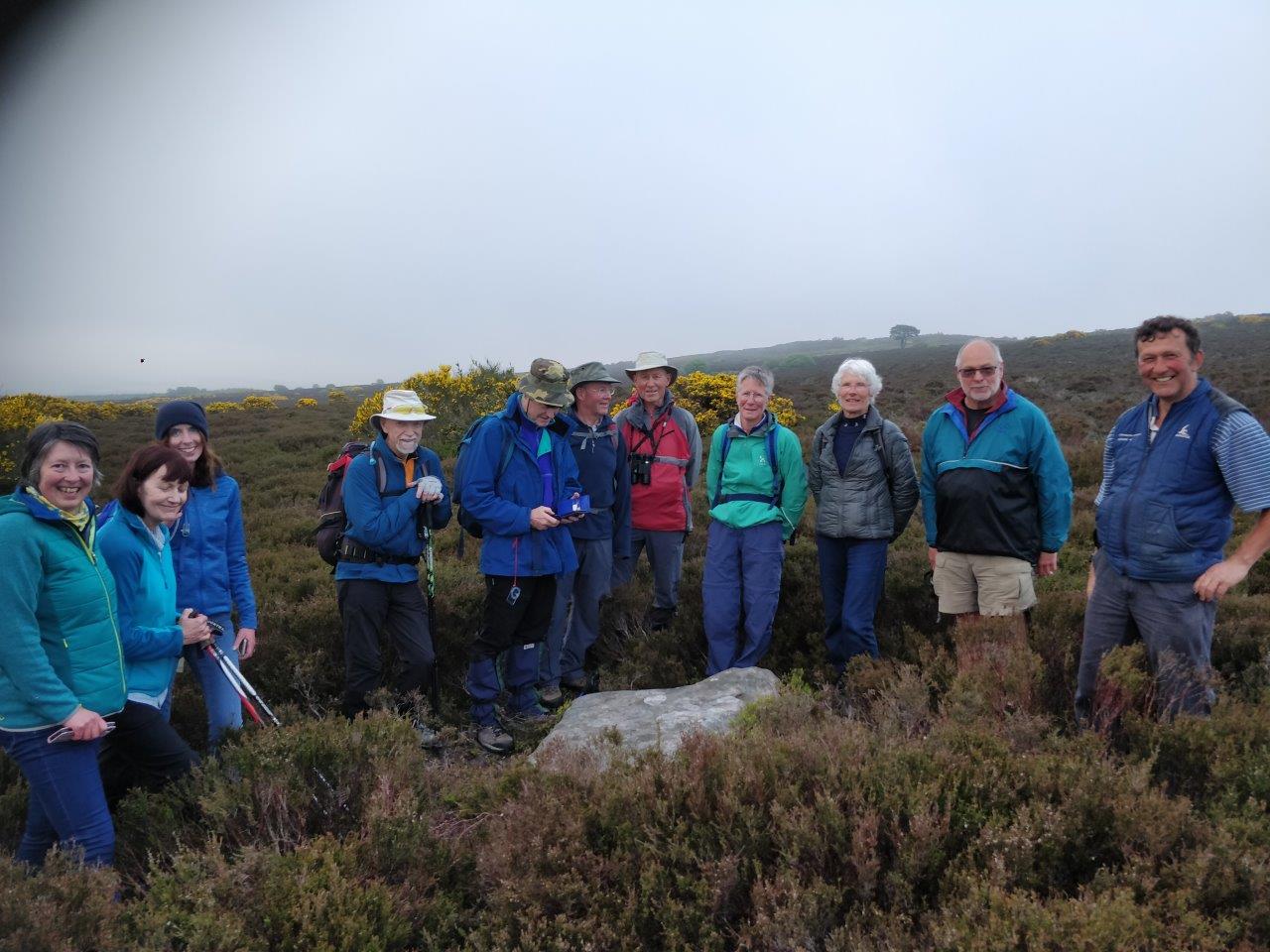 11 members met in the car park at Invermark at 08:30. The meet was conducted as to MS guidelines and an attendance register was taken. The weather was remarkably calm and mild as the group set off at 8.40, however the first sharp shower of the day was experienced within the first 200 metres and had a few members scurrying for waterproofs. The group made good progress along the track past Loch Lee and onwards to the footbridge where the route leaves the track and branches left towards the Falls of Unich. The going became very boggy underfoot from this point due to all the recent rain but on the other hand the waterfall was looking very impressive as a result. After a photo stop the walkers started the long climb up towards the falls of Damff. If anything, this waterfall looked even more impressive. A short distance further on the group crossed the footbridge to the east side of the burn and as the weather was showing signs of turning again, a decision was made to stop for an early lunch before the rain set in. This proved to be a good decision as the walkers were pelted with hailstones just as they were setting off again. Thankfully this did not last long but there was a noticeable drop in the temperature as the path levelled off across the top of Cairn Lick. The cloud stayed clear of the tops to allow good views along Loch Lee and beyond to Mount Keen. On the descent down the Shank of Inchgrundle one member unfortunately stumbled and sustained some nasty facial injuries. After some rudimentary repairs he was able to gamely carry on. The route rejoined the outward path at the west end of Loch Lee and the walkers were back at the car park by 14:30. Wildlife spotted included lapwings, dippers, thrushes, tree creepers and one brief glimpse of a mountain hare. 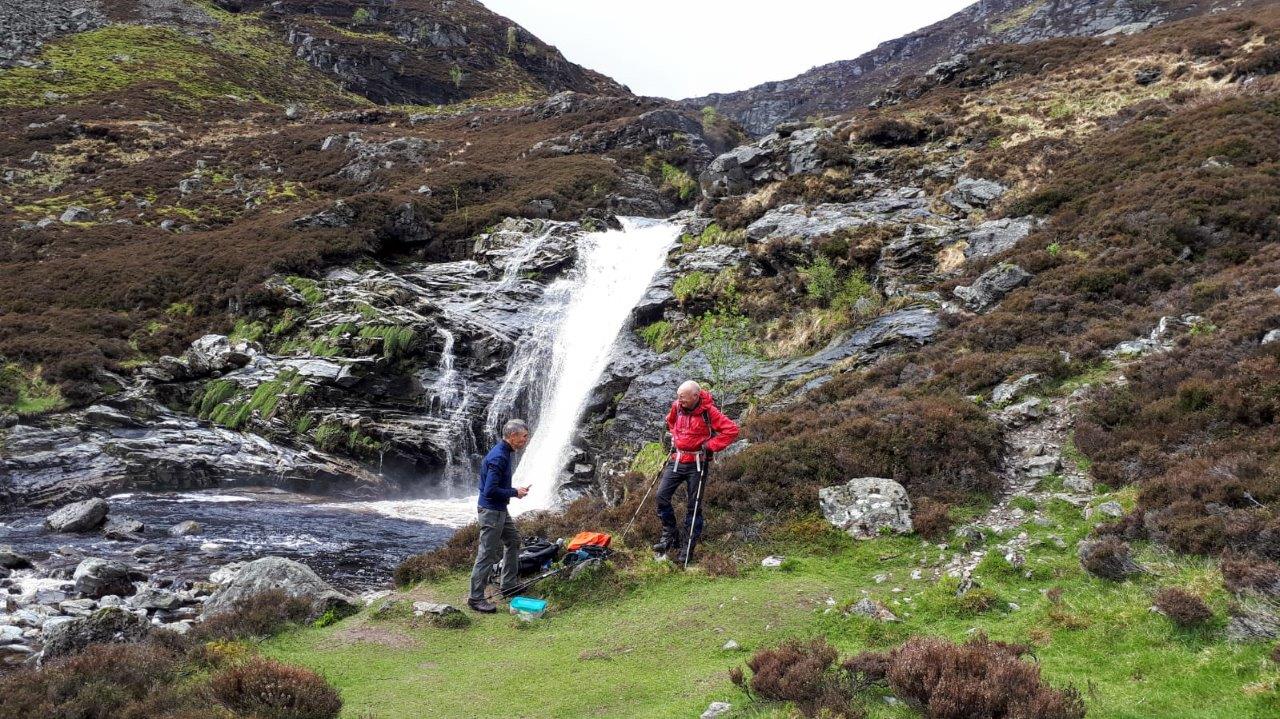 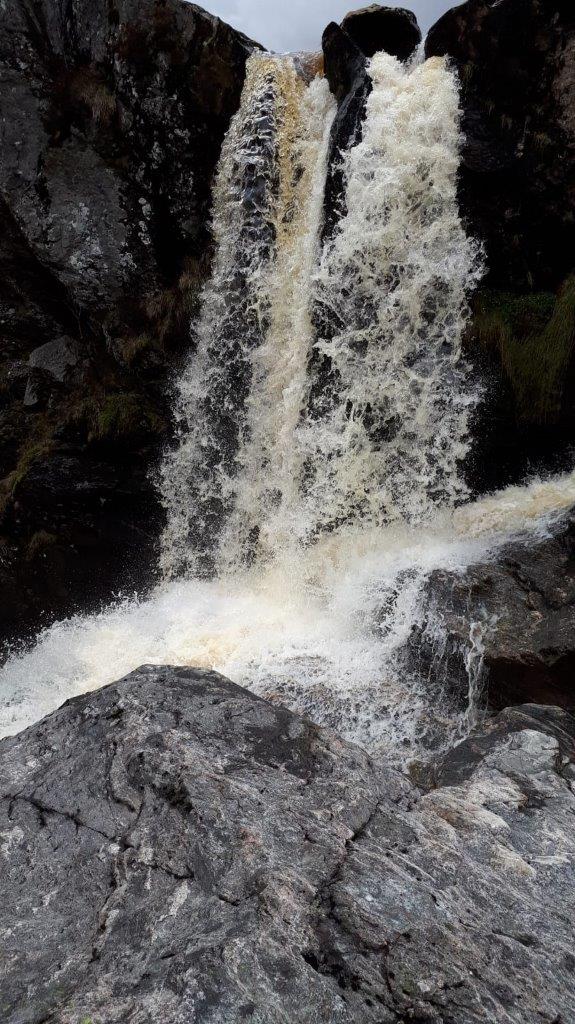 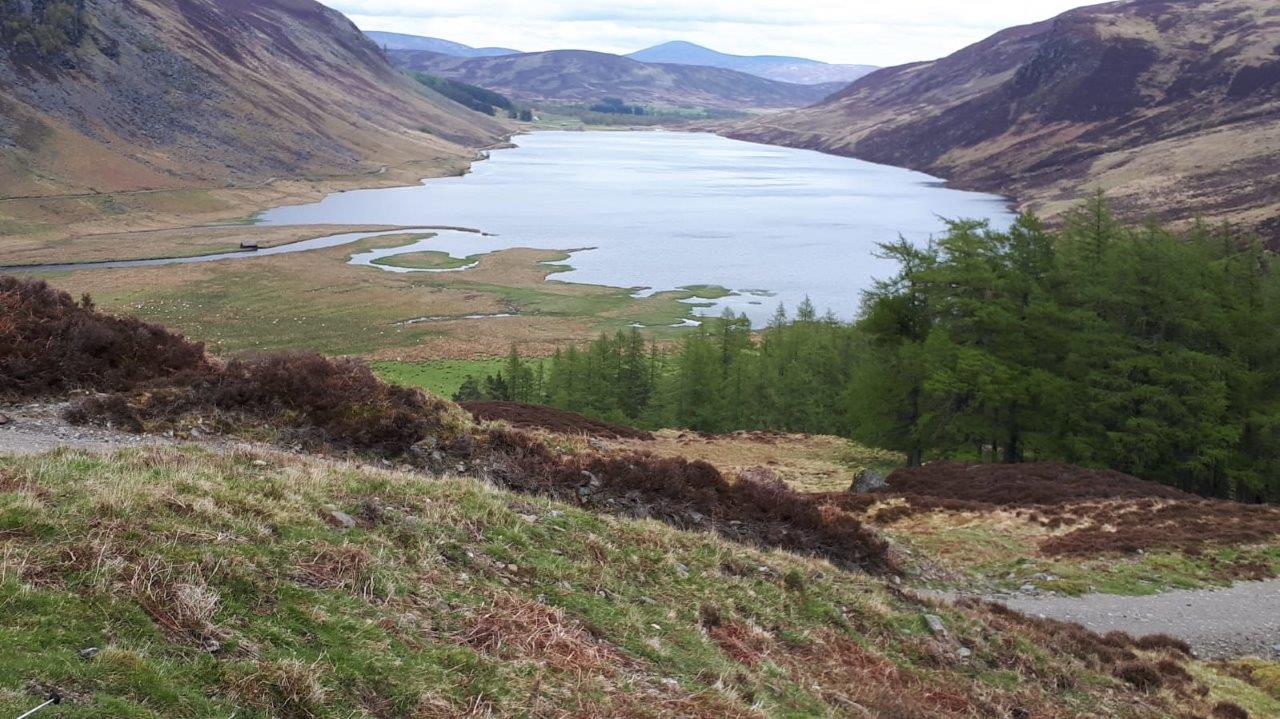 11 members met in the car park by the school at 19:30. The meet was conducted as to MS guidelines and an attendance register was taken. There was a little rain to start with, but it cleared up during the walk. Steve led us up the west side of the South Esk to a new bridge and then back by the east side, visiting the Airlie family graveyard before returning to the cars at 21:30. The pace was slow and we had lots of stops for a blether. Common sandpipers and grey wagtails were spotted during the walk. 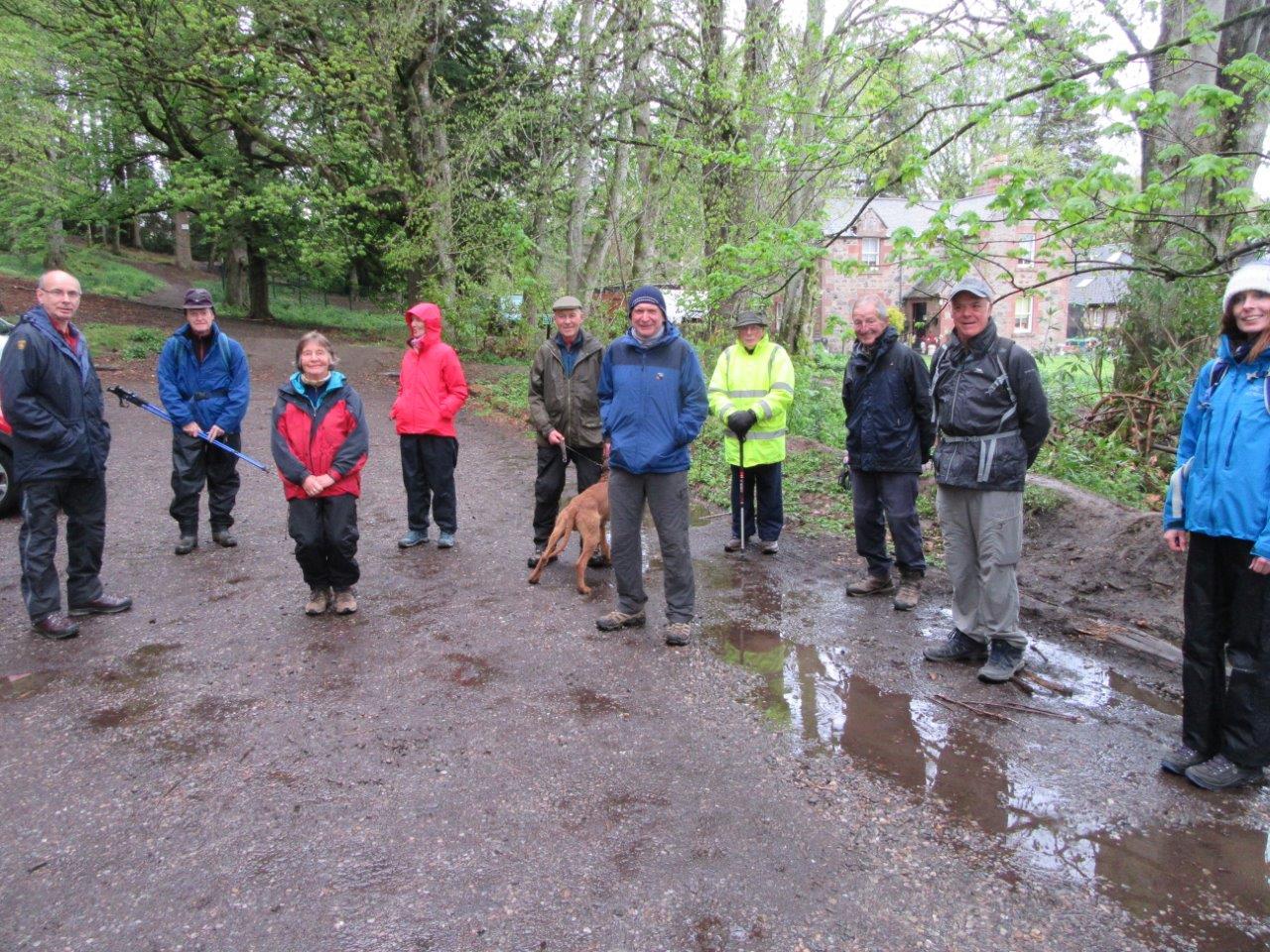 The was the first meet since the pandemic started. 15 members attended in 2 groups. After presentation of the Mather Neep to Clare by Mr W. Mather himself, a group of 8 left from the top of Glen Lethnot at 09:15, contouring round the side of Hill of Mondurran and climbing on easy slopes to the bealach below Mount Sned (621m) on then west to Hill of Glansie (726m). They stopped for lunch at Dog Hillock, then cut north to Ruragh (735m) on a landrover track before turning east to Hill of Berran then dropped steeply back to the cars. 13.4km, 610m ascent.
The other group 7 members attended. The group left from the big car park just north of Rottal at 09:05. They climbed steeply up to Manywee (685m), then dropped and climbed over Finbracks (756m), stopping for a snack on the eastern side. Then it was then a traverse over rough ground to Ruragh (735m), reached at 12:00, hoping to meet up with the Lethnot group. Here, they turned north towards White Hill. A stop was made for lunch was down at the bealach then a long climb up to White Hill (778m). From there, they picked up a track and descended on it almost back to the cars before making the mistake of heading to the cars directly over boggy difficult ground and a shoogly fence! Weather was dry most of the way with a cool wind. Good views to the east and south, but he higher hills to the north were capped in cloud, and the group experienced some rain and sleet blowing through on White Hill. Everyone enjoyed being out again, though the walking was quite rough in places. Several golden plover were spotted and also many mountain hares, still changing from their winter coats. 15.6km 845m ascent. Back at the cars at 15:00. 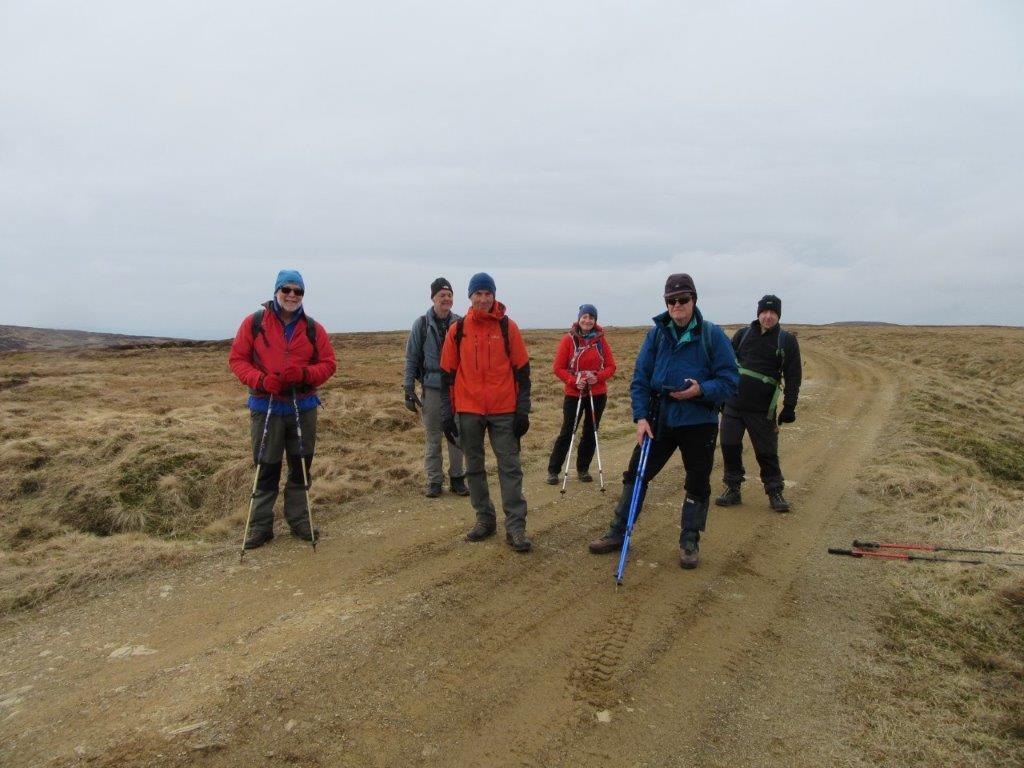 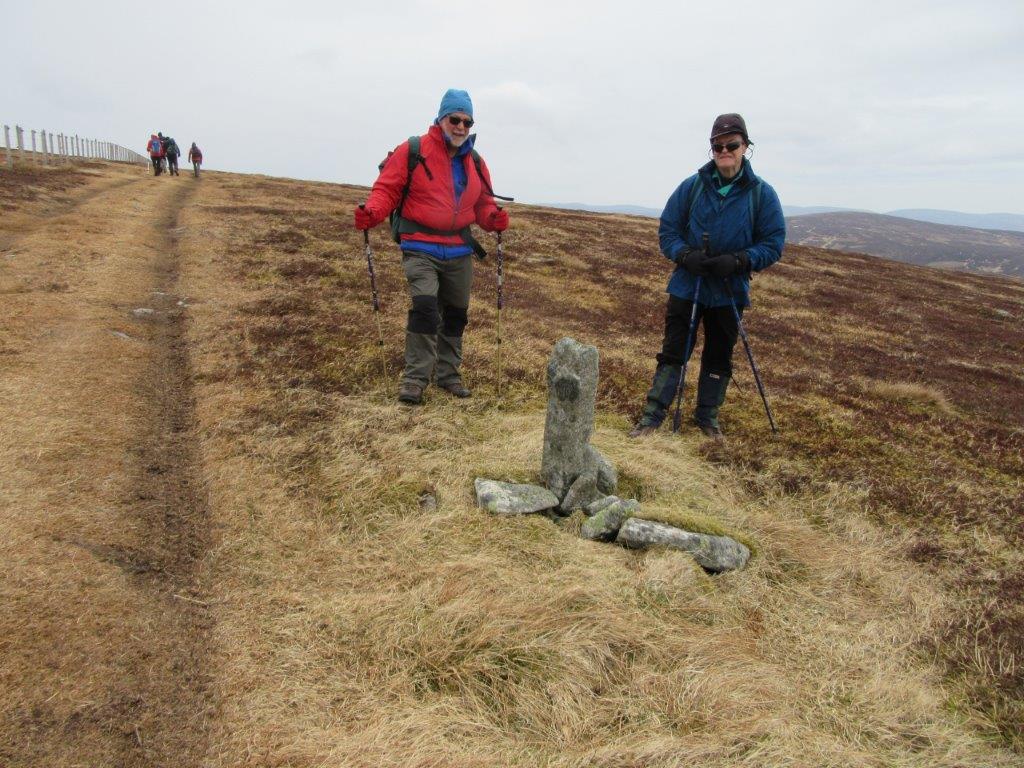 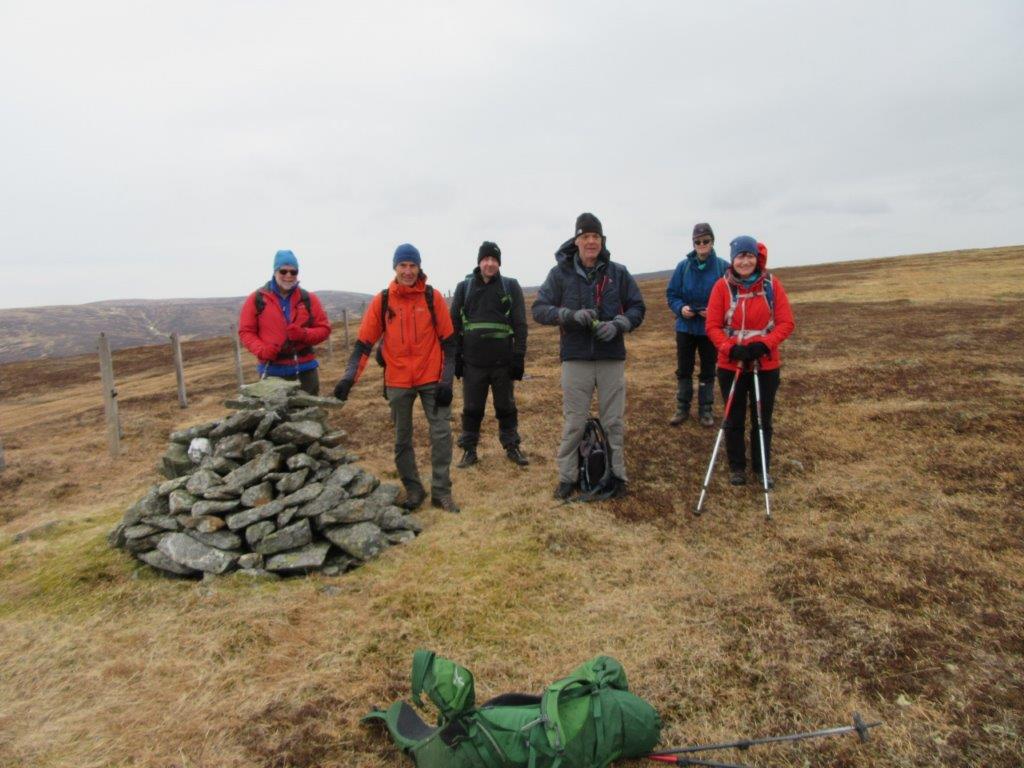 Online By Zoom, 19:30. 22 members attended, including a new member, Colin Scott, who was welcomed by Linda.
This was a modified version of our usual Members Night. Each member was restricted to 3 photos instead of the usual 10, because of being online. Willie Mather had proposed that members should choose photos that best portray the club to that person and which show something memorable to them. Each person will then explain why they have chosen each of their photos. Willie was to be the judge.
The event was very successful with 13 groups of 3 photos, plus a few extras at the end. It took three 40 minute Zoom sessions to complete.
Willie chose Clare as the winner because of her narrative, but thought that everyone was really a winner. It showed the great camaraderie of the club and lots of great memories of days together. Clare is to be presented with a turnip mug and a neep! 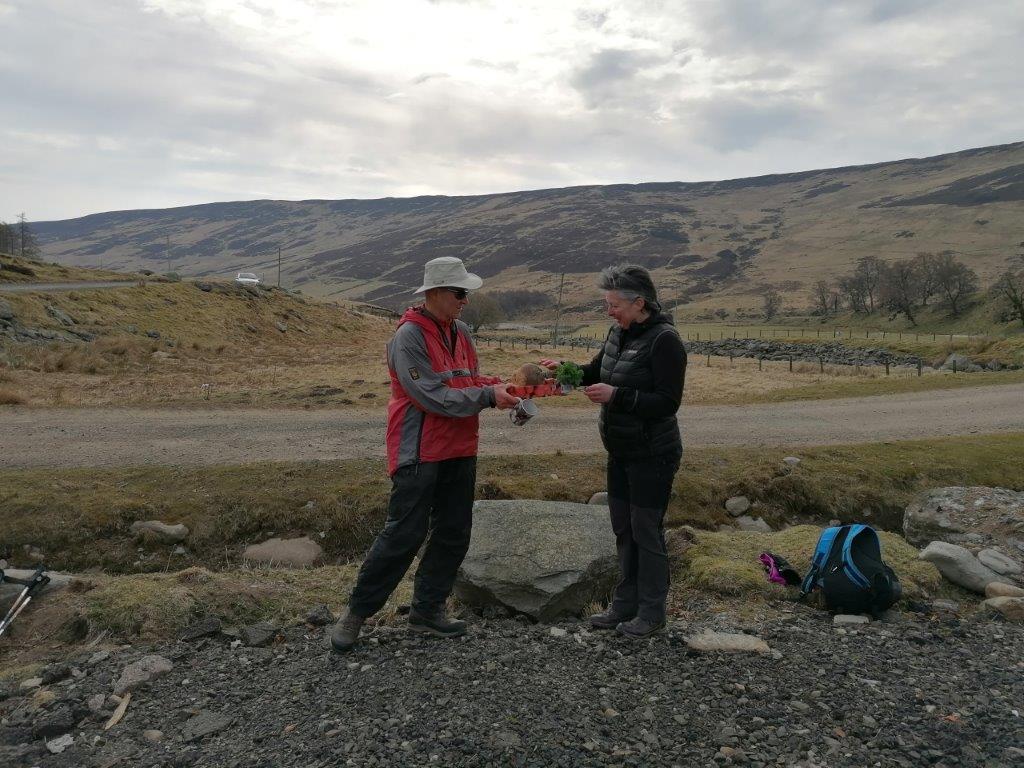 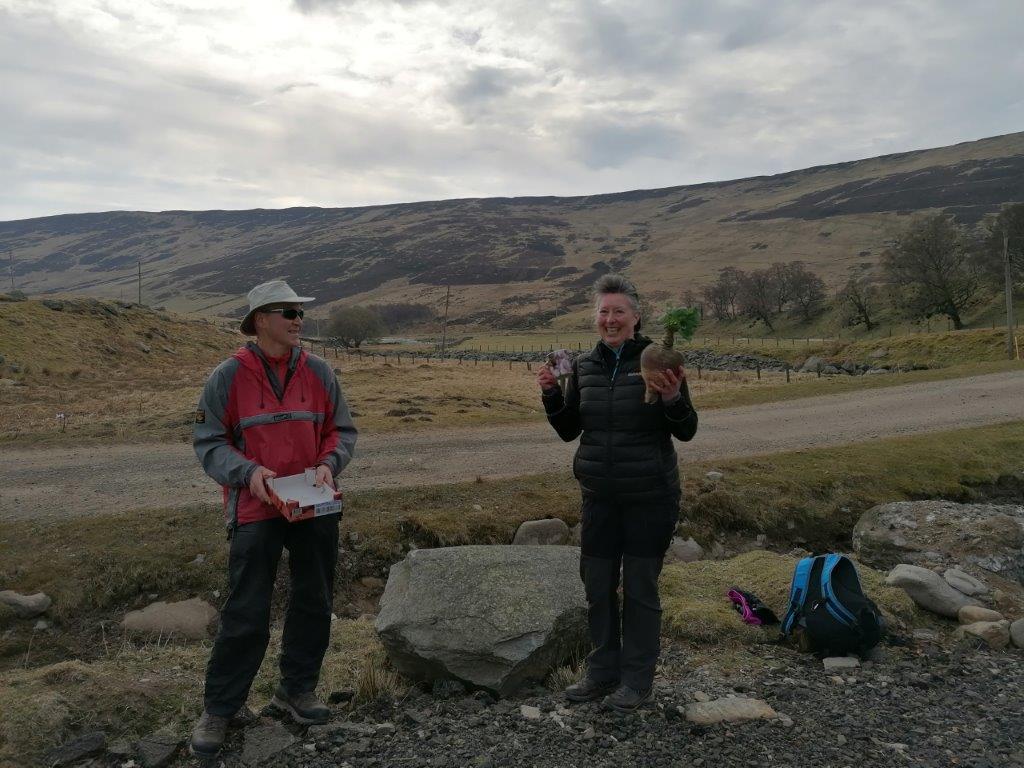 11:00. The full committee meets to discuss resumption of walks following proposed relaxion of the Covid-19 rules and guidelines, by the Scottish Government and by Mountaineering Scotland. Colin and Ray volunteer to become Covid Officers. An attendance register and a risk assessment will be prepared by Colin. Mel to work on an information sheet summarising our guidelines.

By Zoom, 19:30. Judged by Graham Chalmers. A fair number of members attended.
20 members had submitted 96 photos in total, which were sent to the judge with alphabetic codes to identify them. The meeting covered three 40 minute Zoom sessions. Graham discussed each of the 96 photos, and then presented the results.

Use the "i" button to see information about the photo, incuding who took it.

17:30 by Zoom for 40 minutes. 15 members attended for a chat.
One year on from the walk at Bennachie and high tea at Edzell.
Our president, Linda, narrated a poem.

The President’s Pandemic Lament
The High Tea meet is here again
And here we are at hame
Socialising on a screen.
It’s really not the same.

Thinking about the club’s last year,
Trying hard to find the good bits.
I feel I really must conclude – and I’m sorry if you think it’s rude -
That last year was ….. the pits!

No meets since March, outdoors or in,
Fun weekends but a dream.
Instead it’s e-mail, website, Zoom.
T’would dump you in the deepest gloom
And make you want to scream.

Well now it’s 2021.
Things aren’t better yet,
But the vaccine’s here and now there’s hope
That things will better get.

Our club will meet again this year.
Quite when we don’t yet know,
But when that time comes one thing’s sure,
We’ll all be set to go!!

26 members attended at various stages during the meeting. Sam Riddell gave a presentation which gave an interesting insight into the very important role and work of the Scottish Charity Air Ambulance (SCAA). It currently runs 2 helicopters. Sam explained how it was organised and how it runs alongside the government system. He also took us through a simulated call-out in a short video. More details can be found on their web site.
After the presentation there was time for a general chat among members.